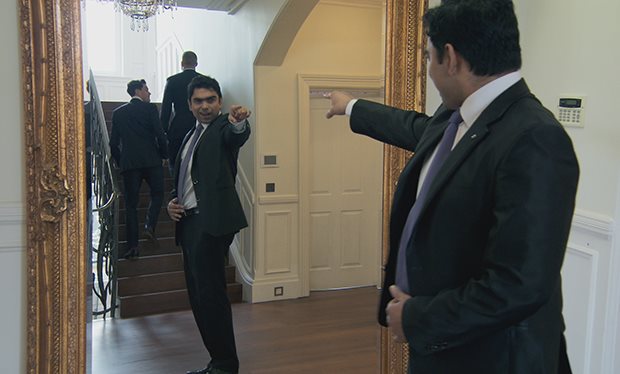 The Apprentice is back with a new group of people all of whom think that the sun shines out of their backside, and that they are quite simply the best candidate in the process without a shadow of a doubt and that the rest of them might as well pack their bags and leave and allow them to be taken on by Lord Sugar as their business partner; all eighteen of them!

Yes, eighteen, which can only mean that there is going to be multiple firings over the course of the next twelve weeks, which is always a lot of fun, for the audience that is, not really for the candidates.

A couple of the candidates stand out from the opening comments before the start of the episode including Karthik Nagesan who says that he will be the future prime minister of the country and also wants to be emperor of the world and is called by his friends and fans Big K. I think that perhaps Big C might be more apposite a nickname. Then there is Jessica Cunningham who believes that she is a female version of Jim Carrey i.e. annoying unless she is being serious. There is also the candidate with the best name ever, Dillon St. Paul. This is going to be an interesting series I think.

The first task was to go to a lock up where lots and lots of tut was and to work out what was worth selling and what wasn’t and then sell said tut to both the public and the trade. They also had a couple of experts on hand to guide them, if they weren’t already confident that they could sell snow to the Inuit.

As per usual it was boys versus girls on the first task so each team went away and thought of a name. The girls came up with Nebula, which none of them knew what it meant and one of them thought it was a disease, but as there was no other better name they went with Nebula for better or worse. The boy’s team came up with the name Titans, as that is what they all were, apparently. That suited the massive egos of all of the boy’s team so that was naturally what they went with.

It was then time to choose a project manager and, predictably, none of the girls wanted to put their names forward so Michelle stepped forward despite not having a background in trading but having the balls and chutzpah to put herself on the line in the first task. The other girls quickly agreed with this choice as none of them were willing to take the risks of putting their name forward, which is strange when they all thought that they were going win anyway.

It was about the same for the boy’s team with Paul putting himself forward on the basis that he has watched Bargain Hunt and therefore is the best person for the job. Alana and Sofiane were giving the sub team managers’ job which was just as well as both of them did at least have some experience of selling on markets and both of them were giving then task of selling to the public.

Both teams went their separate ways to the lockup which was, as Lord Sugar said, packed with tut both vintage and collectible, not that any of the candidates knew which was which. They decided what they thought looked like the most valuable ones and discarded what they thought was worth nothing and therefore likely to lose them the task and both sub teams took stuff with them.

Titan agreed to sell at the highest margin that they could get away with Nebula not being sure what they should sell the stuff for, even if it was worth quite a bit of money as it is better to get rid of the stuff than have stuff left over, even if in this case there was no penalties for having stuff left.

Even before Nebula had unpacked their stuff at Camden market they were already selling stuff for prices that they just plucked out of thin air. Titan was far more cautious holding out for the best possible price. Both trade teams made monumental cock-up’s with Nebula losing their stock for a while as they went one way and the van went the other and Titan agreed a sale of more than £300 only to find out that the person they were talking to was the organ grinder and not the monkey both losing valuable time.

Back at the market things were being sold left right and centre, well by some people at least. Natalie sold two vases for £17 which she was well pleased with, Sofiane sold a vase for £175, and one of the girls sold a pair of chairs for £17.50 which were valued by one of the experts as being worth more than £300 for the pair.

Back in the boardroom afterwards the totals were added up with Nebula making total sales of £959 and Titan total sales of £1428.10 with the majority of it coming from the market sales which beat the girls joint total, so the boys team won by quite a margin. It was mentioned that the girls’ teams were basically throwing items at the customers rather than trying to sell for the best price, which was certainly what the boys’ team did. It turned out that Natalie’s sale of the vases was a bargain for the purchaser as they were values at more than £100 (Natalie’s face afterwards was a picture) and the chairs which were also massively undersold. It didn’t help that the boys sold a vase valued at £7 for a massive profit, which meant that if the girls were more careful with their pricing strategy that they might well have won the task.

In the end Paul was saved by the performance of Sofiane who pretty much ran that task from start to finish and does make a statement to the other candidates none of whom really shone in this particular task, or at least, not in the way that Sofiane did.

Michelle as project manager had to make the hard decision to take two of her colleagues in the board room and chose to bring back Alana on the basis that she didn’t do that well in the market and Rebecca on the basis that she didn’t really sell that much stuff, which to be fair none of them really excelled in selling stuff, not at the price that they should have sold them at least.

So who would be fired out of these three candidates? Michelle as the project manager of the losing team was the obvious choice for the firing on the basis that her team lost alone; Alana did her best in her job in the team and actually did run a good team, which did make quite a bit of money without a great deal of guidance from Michelle. As for Rebecca’s she didn’t do that bad and made an effort to sell stuff and perhaps didn’t make as much money as some of the other girls but was that really enough to fire her so early in the process without an opportunity to see if she would actually be able to sell stuff, if that is the be all and end all of the process, which I am not sure it is, all told.

In the end it was Michelle who was fired mostly for being the first project manager to lose a task, which I suppose was fair enough in the end. It would have been a bit hard for the other girls to be fired at that point when Michelle, as the project manager, could take the blame for the failure of the task, and, ultimately, she did, which in the end was not that surprising.