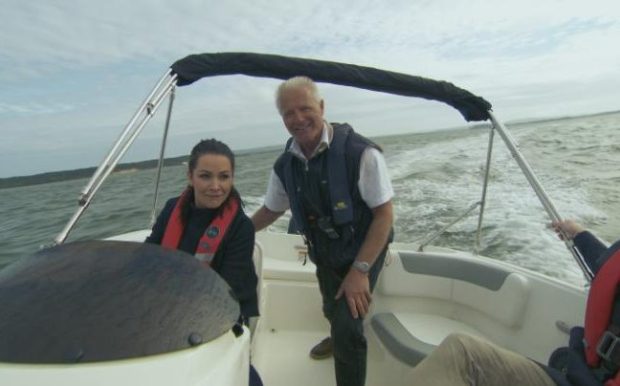 Selling was the name of the game in this week’s task. Nebula headed by Frances and Titans by the Big K were dispatched to Poole in Dorset to the boat show where they had to fight over two big ticket items: a speedboat and some jet ski’s and numerous other items all boat related to hawk at the show. It was one of those tasks where sales figures were going to matter and each of the team was ready to make sure that they smashed their sales targets and get the most money that they could however they could and there isn’t much these people will not do to make a sale.

Big K started off by asking his group who the people who had experience of selling high priced items and it was Samuel who piped up stating that he does that sort of thing everyday. Karthik ignored him and put Grainne and Courtney in charge of the high ticket items when neither of them had any experience of this sort of thing and he had somewhere there who had such experience.

To be honest Samuel didn’t really push it and moan about not being able to sell the big stuff like people have done in the past which was a nice change to be honest. Frances split up Sofiane from ePaul by taking him with her to the big ticket items and let Paul lead the subteam with all the other stuff, a smart move by Frances who knew that fireworks would ensure if Paul and Sofiane had to work together on the sub team, which had been a proven issue in other task so one can see why she decided to take that course of action.

Both teams schmoozed with the vendors of the jet skis and the speedboats and the candidates had a go on both with Sofiane in particularly enjoying himself immensely, no doubt imagining himself as a James Bond type figure but probably not with Frances as his Bond girl. They were so excited that they forgot to ask very much about the specs of the jet-skis. They did get a bit more information about the speedboat, but not much more.

Grainne and Courtney were a bit more questioning about the specs than the other team were. As a result of this Grainne and Courtney got the jet-ski gig with Frances and Sofiane left to hawk the speedboat but at 20k a pop it can’t have been that bad a deal if they were able to sell some.

As usual Big K totally ignored Alana and pretty much forgot that she existed so whatever she did do in the task he didn’t notice as he simply was not interested enough to notice. Despite the fact that Grainne and Courtney had no experience of selling high ticket items they did make a couple of appointment to see people at the show and this lead to a potential of multiple sales from one of them. They didn’t appear to be getting much interest from the general public thought.

Frances and Sofiane got a bit more interest from the general public and actually did manage to get a couple of sales of the high priced speedboats.

Nebula did their best in trying to sell the other items and they seemed to be doing quite a lot business whereas Titans were not doing quite as well with Dillon making sure everything looked nice so that it might entice people to actually look at his stuff, but failing to clinch that all important deal to actually make some money.

So in the end it was all down to who sold the most of the high-ticket items as to who would win the task. When it came down to it in the boardroom when asked if Big K was a good project manager you could see the tumbleweed floating past whereas Frances had unanimous praise from her team, and this was before the results were announced as well.

When the sales figures were announced Nebula managed to get sales more than £1000 with Titans only selling just over £100. Lord Sugar was most pissed off at this paltry amount, especially when they had all told him how good they were at selling all of the time. Now it came down to the sales of the high ticket prices.

Frances and Sofiane’s sub team managed to sell two boats but despite the potential of a big order for Grainne and Courtney’s sub team Titans chalked up no sales at all meaning that Nebula had beat them by £40k which was the best ever winning margin of any previous task on the apprentice and also the worst performance of any team in any apprentice so far.

It was so bad that the Big K was fired before he was asked to bring people back to the boardroom, which certainly set tongues wagging. In the end he asked Grainne and Dillon for who should come back into the room and Grainne named Samuel and Dillon inadvertently named himself and Alana so it was those three for the chop next.

Samuel’s tendency to do whatever he wanted, despite what his project managers said and also the fact that he didn’t step up to the plate on this task when he was clearly the best person to sell the high ticket items and he was fired.

It almost seemed like we would get multiple firings after all of this but he let Dillon and Alana return to the house and Dillon promised that he would no longer be a nice guy after this task, and we will have to wait and see if he can manage to not be a nice guy after all.