A spoilery review of the first series of Sense8 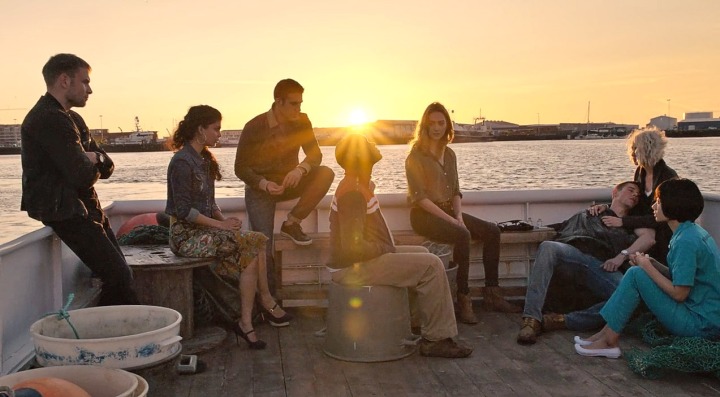 What drew me to watching Sense8 in the first place was the fact that it was advertised as from the makers of Babylon 5 and The Matrix, both of which I enjoyed so I decided to watch this show and I really didn’t know what to expect, because it really isn’t much like anything else out there.

It is a show that needs careful viewing as it is very easy to get lost in there and it really works if you binge watch it as you get drawn into it and you can concentrate on the ongoing story much better. I watched all twelve episodes in three days and I think that I enjoyed it better as a result and got much more involved with the world and the characters and, I think, got more out of it then if I had watched an episode a week.

The series gets off to on an interest start with a woman, Angelica (played by Daryl Hannah) who is clearly in a bad way and we realise that someone is after her and at her side are two people who are both talking to her at the same time. Of course we cannot see either of those people. Then eight very different people see Angelica as she goes through her last moments and she ends up killing herself. Then these eight people who all seem to have migraines start to experience each other’s thoughts and feelings despite having little in common and never having met each other before, more often than not at the most inopportune times possible.

It has to be said that this series has the most disparate and unlikely bunch of characters ever to appear in a single television series.

From the point of view of the order in which they appear in the titles the first character is Capheus, who is driver who lives in Nairobi and does this for one reason only and that it to make enough money to by the medication that his mother needs as she is suffering from AIDS. Secondly is Sun, who is from Seoul and is a business woman and champion kick boxer.

Next is Nomi who is a computer hacker and blogger who lives with her girlfriend Amanita. Following her is Kala, Indian scientist due to get married to a man she does not love. Next is Riley, an Icelandic DJ who lives in London, followed by Wolfgang, a German locksmith and safe cracker. Finally we have Lito an actor with a secret from Mexico and lastly but by no means least we have Will, a Chicago police officer.

You see what I mean about a disparate bunch of characters that you wouldn’t ordinarily group together which works really well in this show. The main thing that they have in common at the start of the show is that they were all born on 8th August 1988, the day before my 14th birthday, not that that means anything in particular.

We learn that these eight people are Sensates who are a species of human who are telepathically collected to other people all over the world and a group of them are known as a cluster and that is what our characters are and as a result any member of a cluster can contact another member wherever they are in the world and any time they chose.

As I said the show starts with the birth of the 8 characters as Sensates birthed by Angelica who appeared to all of the people in the new cluster that she has birthed as it were turning them into Sensates and giving them all a terrible migraine, which is the start of the process.

Over the course of the following twelve episode the sensates start to realise that they are different from other people when they start hearing, seeing and feeling what other people from the other side of the world hear, see and feel; and they begin to be drawn into each other’s worlds whilst they all go through different things in their lives and grow closer to each other as a result.

We learn bits and bobs about how their shared worlds work and why they are able to do what they do and then some of the much stylised scenes that we get in the later episodes make sense.

It started out for them rather slowly for example when we first meet Will he is hearing loud music in the flat next door, which is actually the music that Riley is playing in the club in London. Therefore when he goes next door there is nothing there, but he knows that he definitely heard something.

Likewise Kala hears rain and thunder where she is in Bombay and that is actually what is happening around Wolfgang thousands of miles away in Berlin, as I guess that doesn’t happen that much in Bombay. Not that I have ever been to Bombay, or Berlin for that matter.

It gets a bit stranger when in Nairobi Capheus is given a chicken as payment for a ride and then the chicken appears as if by magic in Suns office in Seoul. Whilst at Pride Riley briefly changes places with Nomi when she is talking to Amanita and later on in the episode Riley briefly changes places with Will. When Wolfgang is attempting to crack the safe he hears the sirens of Wills car and Riley can hear the clicking of the safe that Wolfgang is attempting to crack open; she also hears the sirens of Will’s car.

Riley and Will are the first of the sensates to meet each other in the first episode as Will comes across the church where Angelica killed herself, and he sees Riley and they have a brief conversation, mostly over the fact that she was living in London but was all of sudden in Chicago. Will then briefly visits Riley in London.

That was a nice thing about the series as none of the Sensates had ever visited the countries where their fellow sensates and so it was always fun to see them realise that they were in a totally different country, well sort of, as it were I mean there were there of a fashion, but only because of the link between the sensates, which Amanita colourfully describes as facetime without a phone, which is as good an explanation of it as anything else.

After the first episode this happens more and more often with different sensates visiting each other, hearing what others are hearing and also having strange reaction to what other sensates are doing such as Wolfgang craving Indian food at the same time as Kala is having her engagement party and Lito experiencing period cramps as well as Lito being aroused when Nomi and her girlfriend, Amanita, are having sex and Kala feeling the warmth of Wolfgang also having sex.

In the third episode we realise that the sensates are able to control each other as Sun helps Capheus to beat up some gangsters after he asks for help and Sun hears him and Will who takes over Nomi’s body to help her escape from the hospital where she is being held against her will.

This is used later on to good effect in other seasons such as when Nomi is escaping from Amanita’s mothers’ house and when Capheus goes to confront the gang and later on in the series when they try and spring Riley from the hospital.

It also appears that if they one of the gets stressed another of them can visit them, or that they can channel their feelings and understand each other despite them speaking different languages which they do as Sun speaks Korean, Kala Hindi, Wolfgang German, Lito Spanish and also that they are suddenly able to speak that language, which must be useful in certain situations.

We find out about a mysterious company called the BPO who are after the sensates, and headed up by a fellow sensate of a totally different Cluster, and it is Nomi who is first at risk when the BPO catch up with her after she collapses at Pride and then being told that she some sort of brain lesion which means that she will die unless she has a lobotomy which she is understandably not at all happy with and with the help of her fellow sensates she is able to escape by the ability of the sensates being able to take over one another if they need to, especially when they know that another sensate needs help which was certainly the case in this situation.

The BPO is headed by a guy called Whispers who appears in the show sporadically over the first series and is first seen right at the start of the series as one of the people talking to Angelica. In this series he mostly after Nomi, until she escapes his clutches, and then later on after Riley in after the same thing virtually happens to Riley at the end of the first series.

I mean Kala becomes more sure over the course of the season, that she doesn’t love Rajan, the man that she is meant to marry and is finding herself much drawn to Wolfgang who shows her that he really is not the sort of person that she should be drawn to, and in a quite spectacular fashion it has to be said.

Sun who was hoping to get out of prison but is still stuck in there by the end of the season and is looking likely that she will remain there for a while at least, now that her father is dead and the real culprit of her supposed crime, her brother, is now even more going to refute any accusations, which might be ignored as Sun is a woman and her brother seems more than likely to be believed than her, it would appear.

Capheus stands up to the gangsters in this series with the help of his cluster and it looks like he end the first series in a better place than he started and looks like with the actions in the later episodes is probably able to afford to give his mother the medicine that she requires.

Lito had quite a season and ends up not caring if people know he is gay or not, despite what it might to his career when he realises how this is effecting not only Hernando, his boyfriend, but their friend Daniela who is perfectly happy to be his ‘beard’.

Will very much gets stuck in this series helping to rescue both Nomi and then later on Riley and it is clear that him and Riley fell in love the moment that they set eyes on each other, which is not quite as clear cut as that between Kala and Wolfgang who both clearly have feelings for each other. Of course he puts himself in danger as Whispers now knows who he is and is now able to find him as he found Nomi and Riley, and that he is no longer entirely safe.

I am glad that I sat down and watched Sense8 and I am looking forward to watching the second series to what happens to them next.